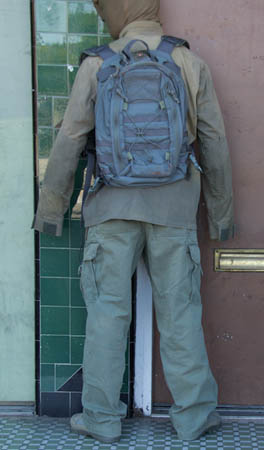 Continuing on the research from my earlier article: A REAL URBAN GREY? PART1 , basically the summary is I'm looking for a better urban grey solid color. After a whole lot of testing with flat samples and finding some color zones I thought worked well, I knew it was time to start moving on to 3D testing which is the final intended use. Starting with an old ass 511 shirt and pair of Tru-Spec pants the results were surprisingly positive.

The sweat and wear stains added an unexpected camo effect, but the main thing was it set a good ballpark color foundation as well. To make sure to cover all based I also went ahead and did tan and charcoal-ish color testing. About as expected Tan does well on light concrete, but not on much else and while despite being off-color, charcoal does better on darker to medium ranges, yet crappy on light zones. For reference on the darks, I was wearing the MSM hoodie RAW in Charcoal, Vertx pants in Smoke Grey, and Wolf Grey backpack.

Although the very first outfit went over great, I didn't want to rely too much on the stain effects so tried more popular tactical colors wearing an OD shirt, with Ranger Green pants (well Crye Ranger), and a Ranger Green backpack. I then mixed it up with some greenish-browns I had laying around to evaluate those color zones as well.

Just in time I got in some stuff in 511 Storm Grey and a combat shirt in Brown/Grey from UF-Pro. Notably although a different color, the body of the combat shirt performed well while the main Brown/Grey sleeves fabric were a bit too dark for urban specific use. The Storm Grey further proved my point that most current "tactical" greys have too much blue in them, but tonal wise did perform decent in lighter to medium areas.

With the data so far, I now had some colors in mind and was able to score some in the range just by hitting up the local Goodwill store. I really lucked out on the pants, but the shirt (amusingly from the Berkeley Yacht Club) did come close as well, just had a little more green. I think the performance speaks for itself in the photos, really making the best mid point of such a wide color base. Siding more towards the middle and darks, the performance is still decent for lights which matches well for a tonal goal as on my research so far the big bright walls are less common than the other urban color schemes.

Now that I had a color I really liked, it was time to compare the crap out of it to try and communicate better to others. Being a similar tone to some OD-Greens, the color is different by being greatly desaturated. Ranger Green using a similar concept comes close, but consistently is darker. Mas grey is nicely desaturated, but even darker than Ranger Green. The body of the UF-PRO Brown/Grey combat shirt is very close, with a smidge more brown than the pants. Busting out the Pantone book, the pants color is very close to 405 which interestingly is 50 black / 50 Trans White, but I would say the pants have a super small dash of green and red (basically greenish brown). Warm Grey 11 is also close, but not dark enough.

For the next step I hope to look into making fabric samples for further testing and to be able to hand out to others to get traction going for the color. Considering the in store color matching never went great paint wise, I'm guessing it will be fight for fabric as well, but should be worth the effort. I do also want to look into possible treatments to get the stain effects all while still using a solid color base rather than getting into full on camo quite yet. For any manufacture folks interested, please give me a holler so I can keep you updated on any progress and so we can make a joint effort. It will be a lot better to work as a group rather than just lil ol' me. The important take away note though is this color zone should be done because it works, not just because I or someone else says it looks cool.

UCP SUCKS (Universal Camo Pattern) RANT
Sunday, 25 February 2007
UCP SUCKS (Universal Camo Pattern) RANT: - For starters I have to breakdown all the acronyms just to make sure you know what the hell I'm talking... Read More...
SHOTSHOW 2008
Saturday, 23 February 2008
I brought more Army Game buddies with me this year to try and step it up a notch. I didn't do as many photos, but made a mean batch of product video... Read More...

MMC: Adjustable combat pistol sights for Sig P226
Sunday, 06 May 2007
Ok so this isn't exactly an optic, but thought this would be the best place for it. I wanted some nice adjustable sights for my P226 and after a... Read More...
THOR GLOBAL DEFENSE
Friday, 04 September 2009
NON Review newsflash: THOR GLOBAL DEFENSE GROUP TEAMS UP WITH EDM ARMS Looking to the Future for Extreme Long Range Shooting Systems In today’s... Read More...