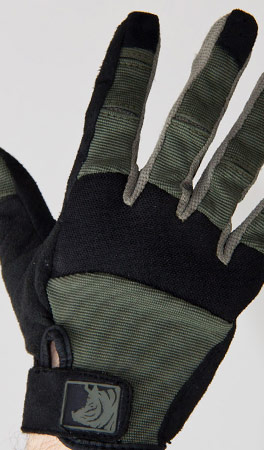 SKD keeps cool guy stuff coming with their PIG line, this time some smooth operator gloves. With a lot of carbon fiber punch-the-wall kind of stuff out there, SKD went the other direction to a streamlined shooter's glove. Developed by a Rogers Shooting School “Advanced” graduate with over a decade of experience in instructing Military and Law Enforcement personnel, they started from the ground up rather than altering existing designs and it shows. The protection is there to keep the wearer's hands protected during firearm manipulation while being overall very slim and flexible to not hinder usage either. A classic example is a heavy padded palm zone may be great for giving bad guys a kung-fu palm strike, however will greatly affected the grip feel on a pistol. The PIG FDT-Alpha Gloves do not suffer from this issue.

The main palm zone layer is uniquely cut slimming down on the lower fingers for added flexibility while adding more coverage to the trigger finger side as it comes in contact with weapons most. The finger tips even wrap around to offer a good tight fit rather than little boxes as seen on some other designs. This is very important for not only dexterity, but too much extra fabric on the finger tips creates discomfort or gets snagged during weapon manipulation. This palm area also has the occasional hole to help with ventilation, so definitely not a cold weather glove. On the back-hand side the finger joints are sewn with their own little joints to give very low resistance to finger movement, 2 for the trigger finger as they know that guy will be doing most the work. For knuckle protection some low key padding is in there, a good balance of general banging around protection while not feeling over-done or action resistant. As a nice touch the thumb area has very soft mico suede with the intent to use for nose wiping in cold weather. Although I feel bad making a mess on that pretty suede, it does feel quite nice on my poor runny nose.

For closure a simple velcro flap is used with low profile hook. This type of hook makes it less snaggy on other materials. On that note the entire glove is overall hook resistant when it comes to hook elsewhere on your gear. As petty as that sounds, I've had some gloves in the past where the main material was the equivalent of half assed loop velcro basically thrashing itself every time it came in contact with hook side. Not to be forgotten, a nice cord pull is integrated which greatly helps with putting the gloves on and an attachment point for storage.

Overall the length / cuff is short which makes sense for the glove type and my samples fit semi-snug compared to what I'm used to on tac gloves. On the very first batch some smaller folks like I recommended shave just a little more length off the finger tips and SKD responded immediately with improvement changes in their latest. In the end I think the PIG FDT-Alpha Gloves certainly meet their design goals of being a shooter optimized glove. They won't let you break concrete with your fist or last forever, but they will let you shoot like a champ with a rifle or pistol, all while not costing a silly amount. Currently at $35, that is a steal in a land of many $100 gloves. As a side note I've been using and enjoying these gloves for a while, I just delayed the post a little to wait for availability to return:

Rite in the Rain - Notebooks
Friday, 26 March 2010
When you need to get your tactical or high adventure write on, look no further than Rite in the Rain products. Featuring paper with an acrylic-based... Read More...

MAXPEDITION Micro Wallet
Monday, 12 November 2007
DIM: 4.5" x 3" Super streamlined wallet for those who have exactly what they need and nothing more. Inside there is a clear vinyl (diffused) area for... Read More...
SHOTSHOW 2009
Saturday, 14 February 2009
I was able to get the crew back together and make it to Shot all the way down in Orlando. People actually friggn' scheduled this time to we were some... Read More...

A day of MSM Tour
Thursday, 14 January 2010
My ol' buddies from the Army Game project Tear and Pye came to the shop with me so I could show them what all we are up to. Had a great time hanging... Read More...