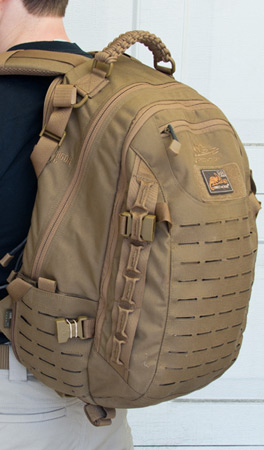 The Dragon Egg is the first item I've gotten to check out from Direct Action and it is nice to see an ally country also making good kit with modern features. Direct Action started out in Poland, but now has distribution in the USA making it easier for us to get.

Being around a 25+ liter sized pack, most would call the Dragon Egg a medium size pack at around the 2 day loadout zone. This makes it a pretty versatile size fitting the needs of tactical folks and EDC crowd alike. Out of the box the pack comes in a bonus Direct Action bag that resembles a reusable grocery bag these days. The main pack material being 500D Cordura and how it is constructed gives a good durable first impression feel. As the egg name implies, the pack has a lot of gradual curves to the shape which helps with smooth zipper functionality and how items fit on the inside.

One of the main signs of modern design are the laser cut panels used to allow mounting like PALS webbing. Using multiple layers and stitching reinforcement it makes for a durable setup, but not exactly giving weight savings like how some manufacturers did cut PALS slots on other designs. That aside, cut slots offer more mounting options on the vertical axis and with more consistent specs. Anyone who has run into off-spec PALS on a vest, which I know I certainly have, will appreciate this. The front has a generous amount of slots so one can get fairly crafty with mounting options. The only other small con I can think of is the bottom only has 2 small drain holes and no other way to access the back of the panel so after a lot of use one can expect some general debris build up in there. A bigger grommet-like hole in the bottom middle perhaps would be a fix for this.

Since already talking about the PALS panels I'll jump to the ones on the sides that are also are integrated on pouches. This seems like a good idea at first, but I worry trying to do both at once makes the functionality a bit half assed at either. Having the option to mount to the side is nice, but if a pouch is added the user has to wrestle with the side cinch hardware there, and the fact the expandable pocket has a zipper release. Fortunately the pocket also has a velcro portion to help keep the pocket from blowing out when not desired. When the expandable pocket is used as intended such as for hydration bottles, it doesn't feel particularly secure, however works well if one just wants a quick stash zone that is also easy to access. I found that a .75L Camelbak Bottle fits in best with the zipper still up, or even a 32oz Nalgene tight, but then since the velcro seal was broken the zipper wanted to eventually shift down opening up the pouch if the cinch straps were not used to secure the zipper. When unzipped, an old school 1 quart GI canteen will fit, yet a bit easy to knock out as mentioned before. All of these fits are further dependent on how full the pack is as well. For some additional holding security, one might be able to add some shock cord to the pull tab to then wrap over one of the bottle/canteens.

Back to the core of the pack, the webbing loops down the frontal sides make for a unique look and offer some useful lashing points. This is refreshing for once unlike many civilian designs that seem to add webbing loops at random. Starting with 1.5" webbing they are sewn down at about 3.5" points with climbing style loops then sewn down on top creating quite a bit of lash placement option variety. As seen on similar sized packs there are cinch straps on the lower and upper sides, yet with less common generous length cinch straps on the bottom offering another good gear lashing zone. Sporting their own Direct Action labeled Duraflex hardware it is nice the webbing has built in velcro style slack management. Although there is a good sized grommet on the bottom to the main compartment, it appears the other major compartments do not have specific drainage.

Up top it is hard to miss the fancy cord drag handle which feels nice and gives it that customized look despite being a stock feature. Strength wise I don't think attaching it to 2 plastic D-rings was the way to go, but survival wise that is a lot of 550 cord ready to be used if in a tight spot. All the zipper pull cords feel pretty robust being made up of rubber wrapped cord with large plastic tips, but I think they missed an opportunity to just rubber wrap the cords together getting rid of the open loop snag hazard. That aside, as is they are easy to grab and use zipper pulls. I suppose how they currently are makes them more reliably point parallel in the direction of the zipper.

On the front there is a loop velcro zone that comes with a Direct Action logo patch standard. For those that take it off there still is an embroidered logo above, but much lower key since done in a matching pack color. The loop zone being approx 4"x2" is more than say the common hat zone size, but would be better if a little bigger to at least be able to mount nametapes to.

Moving to the back it is noticeably rigid for support while offering a substantial amount of padding. What they call their CVS-Combat Vent System provides a large amount of padding standoff and a big channel down the middle to help with airflow. A similar amount of padding is also used on the shoulder straps giving this pack a lot more padding than most other packs this size. The shoulder straps also sport the usual webbing for cord routing and D-rings for connection points along with a sternum strap. I'm not so happy the sternum strap webbing is 3/4" wide instead of 1" making it less strong and harder to replace broken hardware, but at least is nice with built in elastic and slack management.

Getting into actual compartments, the upper front has a single zipper pocket with a soft material interior making it useful for things like phones and sunglasses. Unfortunately it is a little small so getting a full size pair of protective glasses in there can be a tight fit. Onto to the next is the double zippered frontal compartment which can hold a lot more than it first appears and is the main organization party. The interior front has a single zipper mesh pocket while the back is quite pimped out. Starting with a deep sleeve pocket, a zippered mesh pocket is sewn on along with 3 pen slots. A little down is another sleeve pocket with 2 billowed pouches on top, one having a velcro flap closure and the other more of a shock cord velcro closure. I would have liked to see the billowed pockets be a little more different in size, but they are still plenty useful. I can't say the same about the key clip up top that I've never found a practical use for on any pack, but hey it is there for folks that like them.

The main compartment also opens up with double zippers, but keeps it a little more simple organization wise. The interior front has a good sized single zipper mesh pocket while the back has an elastic opening sleeve pocket handy for tablet sized electronics, hydration bladders, and quick stash storage. There is a small loop with a buckle for hanging hydration bladders along with a port up top to route cables and tubes.

Finally there is the back compartment which opens up with double zippers as well and has a hydration hanger loop. It is hard to see at first, but there is a port hole to the main compartment to then allow usage of that top port hole. Organization wise there is a padded sleeve with velcro closure giving further options for a place to put flat electronics or hydration bladders. They say a 15" laptop will fit, but I think that is a bit model dependent and 13" is a safer bet.

As usual I still rarely use compression straps on packs of this type so after being a bit frustrated with them at first I eventually was able to get them out of the way without too much drama so I can enjoy easier access to the major compartments. Not to be forgotten, a 1.5" waist strap is included that is easy to take off if not desired. I find it certainly a bonus for heavier loads or if needing to reduce flopping around. For those who think the waist strap should be padded, I'd say you are in the wrong pack size class, and luckily for you they offer that on the Direct Action Ghost pack.

Nit picky stuff aside I find the Dragon Egg a solid pack that offers a unique look with some great modern features and functionality all at a pretty darn reasonable price. There are all kinds of loops and PALS slots for additions and the the interior has organization that should fit many user needs with the bonus of having more than usual padding for long term comfort. I look forward to checking out other Direct Action products and what they come up with next!