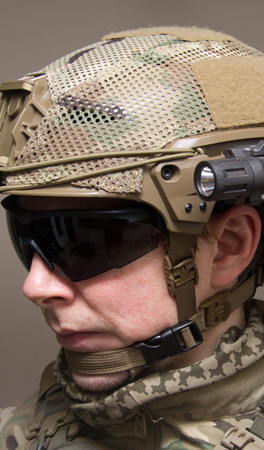 Still catching up with my review backlog, I'm fortunate the Team Wendy EXFIL LTP HELMET continues to hold up as a solid modern full featured bump helmet. Tactical Cool guys have been using skateboard type helmets for a while now and the EXFIL is a great example of taking that idea to create a tactical version from the ground up rather than a make do compromise.

A bump helmet typically refers to non-ballistic and some may inquire what is the point? I have a SF buddy that gave some amusing insight that he never knew why SEALS bothered to wear bump helmets till he got a chance to do some ship drills. It then became very apparent it is really easy to wreck your head while moving around on ships and similar structures. Additionally although it won't absorb much frag or any bullets, non-ballistic does mean you will save a lot on weight, coming in close to half the weight of the ballistic counterparts. (1.6 pounds vs 3 pounds)

Protection aside, technology is becoming more important in tactical needs these days and the EXFIL helmet comes ready to go on mounting options. Starting off is the Integrated Wilcox W-shroud for NVG mounting; made of metal and straight up integrated into the helmet, one does not need to worry about any wobble here. On the sides are mounts for all kinds of sneaky helmet tricks. 2 Magpul MOE picatinny style rails are included to mount as desired and although not shown, a Rail 2.0 package is available to offer a small picatinny rail and goggle posts for interfacing with specific goggles to keep the back of the helmet free for other mounting. Comm headset adapters are also available to allow external mounting of ear-pro/comms making getting the helmet on and off a lot easier. And say you are so cool you are going to rock some HALO missions, there is even a slot for the specialized oxygen mask strap.

Back to features included, the EXFIL comes with bungee hooks up front for NVG stabilizing and retention along with a similar shock cord/hook setup in the back to hold traditional goggle straps or generally securing back mount gear such as counterweights/battery packs. Me being a recent NVG newbie, I'd like to note there were no obvious connection points for the bungee hook to connect to the NVG mount or unit, so I suppose it is assumed one has to make their own with 550 cord or similar. Not done there, loop velcro is even mounted on the popular spots for holding patches, strobes, lights, etc.. I prefer a bit more loop on the top and luckily the helmet cover addresses that which I'll get more into later.

Moving to the interior, things could be summed up as fancy. Although based on the common velcro attachment pad system, EXFIL has it's own special core pad setup (Zorbium foam liner), and then extra pads are included to mount on top and allow further comfort customization. Being used to ballistic helmets where the pads have more depth and give, I thought the EXFIL pads were a bit stiff at first, but it didn't take long to get used to with the less weight and all. The EXFIL also goes big with the chin strap/harness using Team Wendy's Cam Fit system. Most of it looks as expected for the chin strap with nice custom cam buckle hardware, but in the back is a BOA closure system to help adjust wrap on the sides of the head. The end result allows a nice fit that wraps around more of the head rather than just 4 key points. Since I'm a small dude, I'm at the bottom of their Medium helmet size range with a head circumference of about 55cm tight. As a result I found I was maxing out the lower/back straps adjustment and went ahead and modified them so I could tighten further. The default maximum strap amount seems way rowdy to me and still they offer a chinstrap extender accessory.

For a good test I lucked out and was able to take the EXFIL to the Costa Ludus RVET class along with a PVS14 and the Wilcox G24 mount. I had dicked around with NVGs before, but finally getting able to use them on a live range with heavy movement was a great experience and opportunity. Getting used to looking through and moving with NVGs was its own problem, but at least I felt the EXFIL was able to put them where I wanted them and kept things nice and secure. After doing some prone work and in general a lot of running around I was curious about trying some counter balances, however overall felt satisfied I wasn't fighting the hardware when it came to mounting. For small details, I think my small size was getting in the way again where the front helmet straps end up fairly close to the front of my ears rather than having my ears end up more in the middle of the sides of the helmet. The result makes wearing ear-pro a bit harder where I have to lay them on top of the strap rather than the strap just being in front of them.

Not to be forgotten, I had a chance to check out the EXFIL helmet cover as well. It is pretty nice being made specifically for the EXFIL, I like the attention to detail where it doesn't cover up any features and actually adds more loop velcro on the top. I forgot to show it on my pictures, but the back bungee can totally come out of the rear wire port with clear design intent. Installation wise it mostly uses the existing velcro to attach to. I think I may have misplaced the supplied adhesive hook velcro for the rear bottom connection spots, so ended up having to cut/use my own. With the main material being mesh, the vent holes of the helmet are still functional and the resulting look is nice with multicam on a coyote brown shell.

As usual specialized equipment comes with the specialized price so most will consider the $300ish price tag pretty pricey, however all the features should certainly be put into consideration. If one were to purchase a nice strap/pad system, rails package, NVG mount, bungee retention, and velcro chunks all separately, the cost and time required to install get way up there. In the end after a good amount of use I was happy the EXFIL helmet did all I asked of it and was ready for more. Besides my specific size issues (Medium just aint the same as Small), everything felt really well thought out and performed as hoped.

Maxpedition Excelsa Framelock Folding Knives
Tuesday, 15 April 2014
Maxpedition has been going for more of a classy look meets hard user design lately and the Excelsa knives are a good example of that. Made of great... Read More...

511 / Blade-tech:Training Pistol Barrel - Sig 226
Sunday, 11 May 2008
This is a straight forward item that assists in training safety and identification. To install ones just breaks their gun down and replaces their... Read More...

MAXPEDITION Micro Wallet
Monday, 12 November 2007
DIM: 4.5" x 3" Super streamlined wallet for those who have exactly what they need and nothing more. Inside there is a clear vinyl (diffused) area for... Read More...
Corps Strength - Book Review
Friday, 30 July 2010
Clearly I don't read as much as I should hence there not being a perfect category on my site for this review; none the less I wanted to share one of... Read More...
Viking Tactics Pistol 1.5 Class
Tuesday, 30 September 2008
Viking Tactics Pistol 1.5 Class Back at shotshow 2008 I was fortunate enough to meet up with Kyle Lamb and was quickly able to determine he was a... Read More...