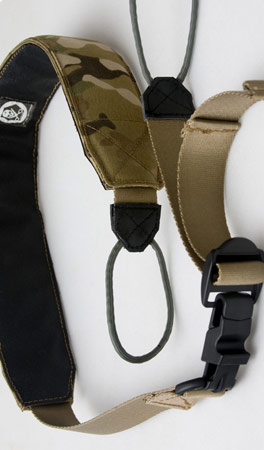 So have another item from the Toy Solider Workshop photo series for you guys. This camera strap is overall pretty beefy and made from good materials we expect in MIL gear. The main connection points use 550 cord, which take some effort, but do fit in those small ass modern camera strap connection points. Although not filled with special padding, the main strap area is thick to distribute weight assisting in comfort.

The interior of this area is non-slip, which some may or may not like depending on your shooting style. The main functionality is in the plastic hardware which uses a piece I haven't encountered before. To release one must push back on a spring loaded "gate" to give an opening to remove the ladder lock. The result is a good balance of being able to release, but I'd consider it higher security than a traditional SRB (Side Release Buckle). For quick adjustability, webbing slack is included with folded tabs so one can yank it to tighten and when the time comes, angle the ladder lock to release the slack and loosen. When fully tightened it is still big for little me, so it helps to wear it like a gun sling rather than just on my neck. It comes a little stiff compared to traditional camera straps, so I plan on beating up on it in hopes to make it more flexible. So far it has passed my weight punishment tests to make sure the 550 cord has ben sewn to the ends properly. Quality control is apparently so-so since I was not able to fully fit a CF card in the little pocket that was designed to do such. One side of this pocket was also missing some stitching so had an unintended extra hole in the side. As for a more nit-picky note, I would have liked to have had the non-slip material folded inwards to cover seams then sewn on for long term durability. As is, the edges are just cut raw which may be a problem with heavy use. Minus the jank small pocket, the functionality is still overall pretty good. One other note is to be aware the strap is somewhat bulky if you are running on low room in your camera bag. When worn on your body the size is not an issue.
http://www.toysoldier.com.hk/product_details.php?pid=48

COUNTYCOMM Force Multiplier Bag from Maratac
Saturday, 29 December 2007
DIM: 13" Tall x 16" Long x 7" Wide Countycomm brings us another solid piece of kit design. It can be a little hard to tell in the pictures, but this... Read More...

SHOTSHOW 2013
Saturday, 15 December 2012
It always seems harder to catch up after shotshow each year, but we have a good pile of videos as usual:http://www.youtube.com/milspecmonkey/Our... Read More...

SUREFIRE Z2 LED Holster Kit
Tuesday, 17 March 2009
I snagged one of these fun packs at shotshow to check out. Included in the kit is the Z2 LED with batteries, 3 additional batteries to go in the... Read More...

More Sparrows Lock Tools - Sentry - Ultra Decoder - Snap Gun
Sunday, 09 December 2012
For any MIL / LE folks that had their eyes on the Sparrows Tuxedo Set, this new Sentry set is certainly worth looking into. The main upgrade is... Read More...