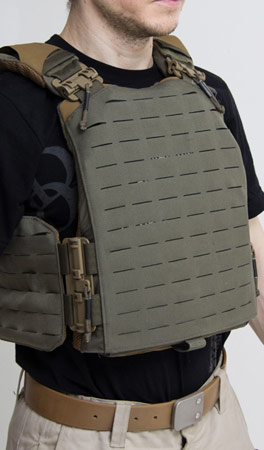 As usual I am catching up with reviews, but as a plus to that is has given me more time to beat up on this here fine Strandhögg Plate Carrier. Even though First Spear has moved more towards their modular AAC system I think the Strandhögg is still definitely worth talking about. For starters, if one is unfamiliar with First Spear, this vest is a great example of their 6/12 design tech and The Tubes hardware.

Instead of traditional PALS webbing to attach pouches, First Spear uses a special mix of 500D cordura sealed onto loop velour with laser cut slots. This effectively makes the main carrier compartment itself the attachment system rather than having to add on extra webbing, thus cutting down on a good chunk of weight and bulk. As a critical feature in my book, this setup allows mounting of both classic PALS compatible pouches and First Spear's own pouches using the 6/12 attachment method. This way one doesn't have to worry about being forced to be stuck with only one pouch brand, but can get the 6/12 specific pouches as desired to cut down on weight. The 6/12 specific pouches use one-wrap (one side is hook, one side is loop material) flaps shaped like trapezoids. These must be folded to fit through the slots so have a natural snag built in, but the main hold strength comes from velcro being very strong with just the little bit of constant pressure that comes naturally by wearing the carrier. The end result is a secure connection with no special hardware which then can come in to around a 40% weight reduction compared to traditional pouches.

While velcro has been commonly used for the main carrier cummerbund closures and tends to work good enough, First Spear continued to push the tech with the Tubes hardware. The general concept is a polymer tube which then slides over a pole and then locks with simple material spring tension in the middle. To release, the pull cord is pulled away to release the lock and then the tube can be pulled away up or down. The fact that the Tubes can connect and release from both directions is a big plus as it can be easy to find one's self in unexpected positions in combat. Currently produced in 2 sizes, the larger tubes can be seen on the cummerbund and the smaller ones are used on the shoulder straps. Since so easy and quick to use, no additional fancy quick release system is needed. Although there are many pluses, the cummerbund mount Tubes do have the down side of taking up some space that would have been used for pouch mounting. This pushes pouches further away from the frontal easier to grab sweet spots; generally the further the pouches are to the back, the harder they are to access. Being a collaboration with ITW, you can count on the Tubes being combat durable taking all kinds of abuse including being stomped on and hit with a hammer on purpose.

Even with weight reduction being a big priority, I was happy the Strandhögg still has good padding on the interior and shoulder pads. I think some designs are getting a little out of hand where sure I could duct tape plates to my body to save weight, but that doesn't make it a good idea. The Strandhögg appropriately uses a combination of air-mesh material and padding to give good standoff allowing for some actual airflow and comfort. For those curious, if one really wanted to, the shoulder pads are removable.

When it comes to actually holding armor, the front and back armor zones are accessed by main velcro sealed flaps which also allow height adjustment of how the plates will ride. Inside each main compartment are additional soft armor pockets that seal with simple velcro closure. As a side note, this setup applies to my older version where on the newer AAC varaint, both the plate and soft armor pockets have their own exterior openings to play nicer with items like the Phokus Trauma Kit. There is some decent flexibility for armor size and type as I was able to fit my size medium, old fairly thick OTV plates in this size small carrier. I don't have any side armor to try out, but the cummerbund is definitely setup to accept varied sizes. The tightness of the cummerbund is overall easy to adjust with some simple big boy shock cord, but one problem is by default the cummerbund can shift in the back since not held in place by anything. A slight shift can actually feel pretty crappy while putting the vest on quickly, but for a $.50 solution I just added some shock cord to the sides to help keep things in place. This way it won't go all wacky on me and I still have the elastic features to allow comfortable breathing even with a snug fit. I had to crank the shoulder strap adjustments pretty far, but was generally pleased with the end result overall high ride of the carrier I was able to achieve. I'm a fan of a high ride to not only cover more important body parts, but also allow more room for a battle belt.

For additional small quirks, the tubes were a little squeaky while rucking at first, but were easy to silence with a little silicone spray. I have not had a squeak issue with them since. Additionally while taking the carrier off and on, sometimes the pole side of the cummerbund  tubes would rotate forward requiring placement fixing before being able to connect the tube. Although not a big deal, I've added shock cord in the webbing loops of the tubes to create a tighter fit and keep them much more consistently facing the proper way to always be ready for cummerbund securing. First Spear has since reduced the issue by making the webbing loops tighter in later versions and on the AAC, but I still think the extra shock cord helps.

After general long term use and exclusively using the Strandhögg at a week long SWAT class I can definitely say I gave it a fair beating and it has held up like a champ. The only real signs of wear are on the interior air-mesh as the draw back to the comfort it offers is that the material is less durable. That said, by wear this only means a little fuzzy and no where near falling apart. Once fitted to my liking it has been one of the most comfortable and low bulk carriers I have worn allowing a great range of movement, the plates being the only real restriction. All the hardware stays out of the way of weapon manipulations including while using slings and is still easy to use in stressed environments. The Strandhögg continues to hold the status of a high end modern plate carrier in my opinion and I hope to follow up soon with its evolution of the 6/12 and Tubes tech seen in the AAC platform.

ShotShow 2014
Monday, 17 March 2014
The usual delay, but better late than never. Got the vids on up at:http://www.youtube.com/milspecmonkey/Our Buddy Don joined us again for the ride,... Read More...
Figure Out Your Load-Out
Saturday, 09 August 2008
Figure Out Your Load-Out <LINK> Hey all, it's Slim. I'm back from my trip and I know you're damned glad to hear it. Feel free to rejoice. Sorry... Read More...

Insight Technology: Super small thermal sights
Thursday, 08 March 2007
Got to look through some of these and was super impressed in their handsized thermal sight. They also had a dot sight with auto aligned visible... Read More...