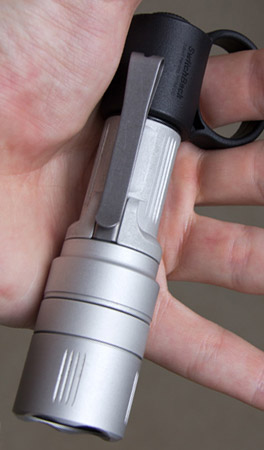 I've been rocking my old SureFire E1B backup light as a part of my EDC (every day carry) loadout for quite some time, but while wanting to try out using the Thyrm Switchback with it I was sad to see this model was not supported. Since Surefire doesn't make the E1B anymore this made sense design wise on the Switchback and ended up as a good excuse to try out the EB1. (Yes the names are a bit confusingly similar)

The purpose of the EB1 Backup, hence the name is meant to be a backup to a primary larger tactical light with the EB1 being a smaller easy to carry light that still has tactical light capability. Since there is never pleasing everyone with one light, they make 3 different variants of the EB1 to accommodate the majority of preferences:

Click-type switch without tailcap shroud — Like the original E1B Backup. Partially press tailcap pushbutton for momentary-on high output; press further to click constant-on high. Return to off and press or click again within two seconds for low output. No shroud around switch. This version is best for non tactical priority daily activities.

Click-type switch with tailcap shroud — Partially press tailcap pushbutton for momentary-on high output; press further to click constant-on high. Return to off and press or click again within two seconds for low output. Raised shroud around switch provides extra protection against accidental activation. This version is best for daily activities and you are worried about you pants or method of carry engaging the switch.

Tactical switch without shroud — Partially press tailcap pushbutton for momentary-on low output; press further for momentary-on high output. Release to turn light off. (There is no click functionality) Twist tailcap clockwise partially for constant-on low then all the way for high output. No shroud around switch. Like the name implies this version is setup for tactical priority.

Besides only using one CR123 battery to offer a compact size, another big plus to the EB1 is the pocket clip. It is integrated well made of metal offering good durability and the reversible design allows mounting heads up or heads down. That said I find the heads up retention too loose in a pants pocket so only good for temporary placement, however the functionality works great for mounting to a ball cap to turn the light into a head lamp. As a small upgrade from the older Backup, the EB1 has a hole in the clip for a lanyard lash point.

For advertised specs, the EB1 sports 200 lumens on high (1.3 hours) and 5 lumens on low (40 hours), the result being a near double boost in high lumens compared to the E1B. To offer the brighter head lamp and multistage tailcap, the EB1 is about .5" longer than the E1B. Fortunately nothing too noticeable as it still fits in pockets fine with room to spare, especially compared to 2 battery tac-lights. The 200 lumens gives substantially more throw to be able to see further distances such as down a street and obviously more tactical blinding capability. Despite the old E1B advertised battery life of 110 lumens on high for 1.3 hours as well, most users are able to get light out of it longer than the EB1, making sense with the lumens difference and all. One might inquire why even bother having 2 different powers and the main reason is 100, or especially 200 lumens is too much light for up close objects. Additionally the low light comes in handy when you want to keep everyone's low light vision as intact as possible and generally not cause a big beacon on yourself to others. If in a crappy long ride situation, just a little light can go a long way so being able to do 5 lumens for around 40 hours straight can be quite useful in survival and E&E situations.

The EB1 variants are another big plus to having options to fit your life style. The tactical one is setup for consistent and speedy deployment of the light, but is slower to get into constant on mode. The click type I think is a good compromise where it defaults to high power and doesn't need a twist to go to constant on, but the time delay functionality doesn't work out so well for tactical use where you want to do rapid quick bursts of light. Trying to do this action with the click-type model will cause the power modes to swap between high and low and when you rock low when not on purpose you are just signaling where you are without blinding the enemy. On the flip side, say you are just looking for something to fiddle with in a dark part of your garage, the click type is more convenient to quickly toggle between a flash of light or constant light at the desired power setting. On either version, I found the 2 stage button to be intuitive and generally feel "right" where you don't have to worry about having to baby the button to get a partial press and don't have to go overboard with pressure to get a full press or click.

To mix things up and to get my full tactical on to try with the Thyrm Switchback I got the tactical version of the EB1. The silver seemed easier to get at the moment and I didn't mind as it gives kinda a NASA look, thus a less tactical appearance for general life use. The Switchback appears to just be a ring, but offers several tactical benefits of: a solid way to engage the light while shooting a pistol, retention while reloading or handling other gear, and ease of grab for deployment. It was hard for me to understand at first by just looking, but the way the Switchback works in tactical mode is one actually pushes on the knub built into the ring with their thumb which then causes the tailcap of the light to push into one's finger, engaging the button and thus the light. Out of all the the tactical light holding methods I've tried with a pistol, I've found the Switchback to be the easiest to deploy with good light aim and getting close to a preferred two hand grip on the pistol. The closest contender being the Rodgers / Syringe method which requires certain lights or mods, I still find it more difficult to get proper light aim and grip while under stress and then doesn't have the ring advantages come reload time.

The way the Switchback mounts on the tailcap makes it so you never have to worry about it slipping off, but also makes it only work with the tactical EB1. The gap space created makes it so the tail cap can't be tightened down all the way, thus it can't be put in high powered constant on mode with the Switchback installed. As a small user toggle, if you don't use the additional supplied O-ring for a snug fit, the tailcap can be tightened down to low output constant on mode. The only downside to this is the Switchback ring can rotate around the tailcap freely with a little play, but doesn't effect functionality. As for some monkey hand size notes, I found the Switchback easier to use on a backup sized light since the spacing is a little different on the large / full size light version. On a large size without gloves on in tactical mode, sometimes the button alignment can end up between my fingers instead of on a finger making button engagement difficult. For additional carry notes I like how in a pocket I can hide the Switchback ring in my pocket if trying to be more low key, or have the ring stick out to be easier to grab in a hurry. I also appreciate how the Switchback is not particularly bulky so does not prevent me from doing any of the other modern flashlight carrying methods.

As a testament to long term Surefire durability, after all these years about the only issue on my E1B is I need to replace the worn down tailcap button.  It still works, the button rubber is just super worn down. The EB1 replacement works out as a noticeable upgrade offering more power and variants to meet user needs. The backup size in genreal is a lot easier to wear on one's person without any extra pouches compared to a"full" size like a G2. If one has extra money around it would be nice to splurge owning 2 versions, the click type for ease of use in safe environments and tactical type with Switchback for when you may have threats to get your tactics on. The Switchback would still be handy on the click type if it worked on one, so hopefully eventually a variant will be available. Even though not necessarily cheap being made in the USA, I find the tactical capabilities the Switchback offers to be worth the money if you ever plan on having to use your light in a fighting application, especially with a pistol.

Recommended place of Surefire EB1 purchase and many Surefire products at a good price:
http://www.lapolicegear.com/sf-eb1t-backup-tactical.html

Thyrm Direct Store:
http://thyrm.com/product-category/products/tactical/
and to see a demo of the Switchback use:
https://www.youtube.com/watch?v=fBpalor45wk

TACTICAL TAILOR AK / M16 Magazine Pouch:
Saturday, 14 July 2007
This pouch is simple but is effective at fulfilling a dual role. Originally made to fit 2 AK magazines, users also found that it was good fit for 3,... Read More...

5.11-TACTICAL Response Jacket
Monday, 02 April 2007
This is just a quick overview with updates to come. From my use so far I find this jacket to be a great lightweight windbreaker. It really makes a... Read More...

Tuff Writer Operator Tactical Pen
Monday, 21 February 2011
Tuff Writer has been keeping busy and offers yet another variant of their tactical pen design. It looks pretty similar at first, but I think they did... Read More...

Camelbak - Thermobak AB
Thursday, 22 October 2009
If you need a low profile hydration unit that can be mounted on or off armor, then the Thermobak AB is definately worth checking out. The design... Read More...

Gerber S.A.H. Knife
Wednesday, 11 April 2012
This here stabby tool is another example of looking fairly plain yet has clever design features that make it stand out in other ways. SAH stands for... Read More...

©COPYRIGHT MIL-SPEC MONKEY 2019 MADE IN USA