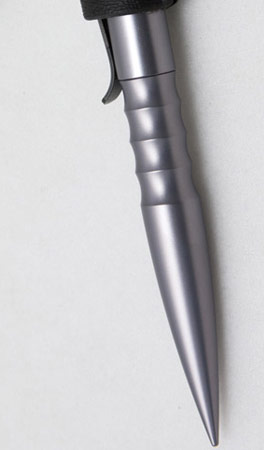 Similar to the Frontline series, KnifeArt.com teamed up with Tuff-Writer to create this EDC variant. Looks like they may have taken some of my advice on my original review as this EDC version is based on their "shorty" version. The full Frontline pen is about 6.5" long while the shorty and EDC are 5.75". I'm a fan of the shortened length as it allows for the pen to be stored in more places. The downside is that it is less optimized for defense, but I'd say the vast majority of users will consider this a pen first and a defense tool second.

Like the original, the EDC is built simple and incredibly tough. Being fairly thick and made out of Aerospace Grade Aluminum, it might as well be a friggn' railroad spike when it comes to durability. The cap makes a nice rounded end while the other end is a spike that is pointy enough to mean business yet not being so sharp you will hurt yourself while carrying. There are no buttons, springs, or snaps; all functionality is screw on/off based to optimize for durability. On that note, it takes a little while to unscrew off the top to get your write on if you have been spoiled with the ready speed of traditional cheapo click pens. This is a downside, but I do agree with the design decision as a snap on cap would likely fly off when using as a defensive tool. Now what I would like solved is what to do with the cap after you unscrew it off. It doesn't interface with the pointy end offhand, despite it can be rammed down on it for a temporary hold, it is obvious it isn't really meant to go there. A good "fix" for this is the optional kydex shealth. It is made to be worn around the neck to makes the pen very easy to access for writing or defensive needs. One can unscrew the pen leaving the cap in the sheath as a convenient way to hold onto the cap when the pen is in use. For some extra notes, the default sheath grip tension is a nice easy grab while being secure. The pen can be put in the other direction (clip facing opposite intended side) to create higher tension, if more security if desired.

Another design change is the exterior where the EDC has "ribbing" cuts while the original Frontline had knurling. It does look cool, but I'll be honest it doesn't do much grip wise. While holding defensively there is only enough ribbing to cover about one finger which usually ends up as the pinky due to the clip placement. When using as a normal pen, the ribbing is totally missed. The original Frontline had enough knurling (due to the longer design) where one could get two fingers on the zone, which was a noticeable grip improvement. I will say the ribbing makes some sense with the EDC concept as it adds some form of grip help while being gentle on clothes or gear. If I had things my way I'd like to see at least one more rib notch, or change the sizing where the cut is turned more into 1 nice big finger stop rather than 4 small ribs.

Some aspects that stayed the same are the clip and the pen cartridge. The clip is made of heavy duty spring steel with rowdy chemically welded bolts. In summary I won't be worried about that breaking off anytime soon if ever. Functionality wise it has good tension and the raised end lip makes it easy to mount. The cartridge is the same ones used in those cool guy space pens so they are pressurized allowing the user to write upside down and in extreme temperatures. They are affordably replaceable whenever you do run out of ink. The exterior finish is pretty snazzy and so far has been very scratch resistant. Although the finish isn't super flat matte, it is non-reflective and won't take on fingerprints. A lanyard hole is in the cap to allow your favorite cord to be added if a connection point is desired. As with all the Tuff-Writer pens so far, the kind of user they attract are those who like things super simple and heavy duty. It may not be the most convenient pen, but you will be able to depend on it with great certainty; rather it be simply signing a check or stabbing a bad guy in the face. The sheath is a little on the expensive side and not everyone is going to want to sport a pen necklace, but I think it really helps out the pen as a tactical admin platform.

ONLY place to purchase:
http://www.knifeart.com/tacticalpens.html

More Sparrows Lock Tools - Sentry - Ultra Decoder - Snap Gun
Sunday, 09 December 2012
For any MIL / LE folks that had their eyes on the Sparrows Tuxedo Set, this new Sentry set is certainly worth looking into. The main upgrade is... Read More...
SO YOU WANT A DROPLEG:
Monday, 04 September 2006
SO YOU WANT A DROPLEG: -Tired of trying to put something substantial in your pants cargo pocket only to have it chafe and bruise you after a... Read More...

Shotshow 2010
Saturday, 06 February 2010
Finally had a chance to process all the friggn media. As always Vegas does not disapoint. Having to run around to get videos setup can be a bit of a... Read More...

MAXPEDITION SITKA GEARSLINGER
Tuesday, 17 March 2009
Maxpedition keeps em coming with further development in the popular gearslinger series. The Sitka first comes off to me as an evolution of mixing... Read More...